An evening with Bill Wyman 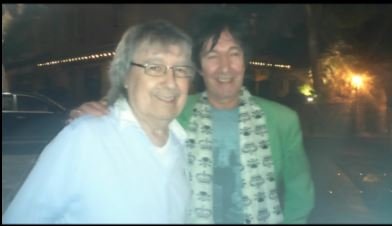 Myself and Bill Wyman, in France

During my evening with Bill, where we were also celebrating his wife's birthday with other friends; it was quite remarkable when I mentioned about a private chat we had some years ago! Regarding Keith Richards problem in Toronto (the drug bust).  Bill remembered the whole discussion, which cracked us both up.  Let me share this true story with you... During a soiree (40 years ago) I said to him along with other friends at our table which included the french musician and film score composer Michel Magne (Who was once the owner of the Chateau d’Herouville), "Bill, is it true, as Keith has got banged up for a short time, and no one knows what will be the outcome, is it correct , which I think I read in the Press Bill, that you've asked Jimmy Page to join the band?". His pragmatic reply was with his eyes directed at me "Well, why would he want to do that, then? He's in his own band!" What a remarkable memory/story that neither of us had forgotten 40 years down the road. More importantly Bill was delighted to tell me that evening, he had just beaten his serious illness. I gave him a big hug - awesome my man! Well done you. X